Mediation Tips: What to Do About … That Big, Gaping Hole In Your Case 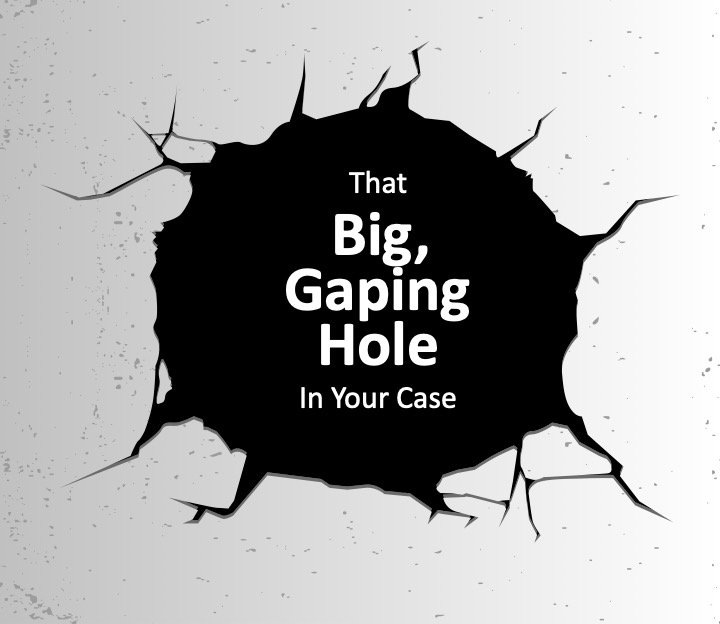 Every case has warts.  But just how open should you be about the problems when you get to mediation? Ultimately your answer to that question is going to depend on two things: how likely it is that the other side knows about the problem, and how confident you are that you can solve it.

Why Would You Ever Bring Up a Problem?

If your adversary already knows about the problem, it can give you credibility if you bring it up — AND explain in a nutshell how you are going to deal with it.  For example, a plaintiff’s lawyer might say, “My client did not go to the ER the day of the accident.  But by the next morning, the pain was so bad that she went to see her primary care physician.”  Or an employment defense lawyer might say, “While the plaintiff was the only person from this department fired in the downsizing, overall we cut staffing by 10%.”

But Now It Gets Harder …

In the real world, of course, you will not have perfect knowledge, and the answer will seldom be clear.  But there is a logical framework you can use as you make your decision about whether to raise the issue.

In general, the more likely it is that the other side knows about the issue, the more important it is to consider discussing it at mediation.  There is no sense ignoring an elephant sitting in the middle of the room.   Additionally, the more certain you are that you can solve the problem, the safer it is to bring it up.  For example, if you are confident that you can keep bad evidence out with a motion in limine, it makes sense to mention it and to explain your solution.

If you think the other side probably knows about the issue, and you have a solid way to deal with the problem, you are dealing from a position of strength. You probably want to lean toward bringing the issue up; you might as well grab the credibility boost for being honest, especially since you have a solution.

What do you mean you can’t solve the problem?! Put on your lawyer’s thinking cap, because you want to have a solution to talk about if the problem comes up. Take the time to draft up what you plan to say if the issue comes up, and be ready to whip it out if you need to. But if you truly do not have a solution, do not raise the issue yourself.

This situation is the toughest of all. Your decision will come down to how likely you think it is that the other side knows, and how brilliant your solution is. Consider waiting to see whether settlement stalls around the issue. What the other side says may tip you off as to whether they know about the problem. You may lose the credibility boost, but you will still have your solution ready to pull out at the pivotal moment.

In this scenario, you will be better off keeping the matter to yourself; after all, maybe you will get lucky.  But you need to think long and hard about what your answer will be if the other side does bring up the issue.

When It Happened to Me: A Case Study

In a case I handled as a lawyer, we were very concerned about our client’s Internet presence.  There were a number of videos that were — well, that we did not relish having the jury see.  The defense lawyer never got close to the topic in the client’s deposition.  Had he seen the videos?  Did he understand why they could undermine our case?  Did he think we could keep them out? Was he a litigation strategy mastermind, lulling us into a false sense of security?  We had no way of knowing.

Ultimately, we elected not to bring up the videos during settlement discussions, concluding our situation fell into the “other side likely does not know; you cannot solve the problem” category.  We drafted the best answer we could and had it ready to use if the issue came up.  Fortunately for us, the case settled before we had to make a decision about whether to file a motion in limine, and risk drawing attention to the videos.